FND in the News – Invictus Games

FND Hope UK is part of the first and only global patient-led charity for people with Functional Neurological Disorder. Originating as a grassroots campaign, it uncovers the hidden world of FND and empowers those affected to live their best possible life.

FND is the most common condition you have never heard of. It is the second most frequent reason for a neurology outpatient appointment and more prevalent than Multiple Sclerosis or Parkinson’s disease. But stigma means people wait years for diagnosis, leading to wasted, expensive medical visits, worsening symptoms and distress. 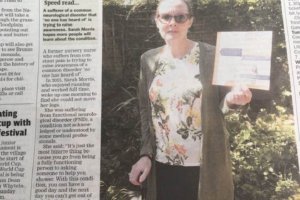 FND in the NEWS – Sarah Morris

FND Hope UK Louyse McConnell-Trevillion, from Biggar in Lanarkshire, was[...]

FND in the News – Jess Standley

A woman from Gainsborough has revealed how she learnt how[...]